As I reflect on the past ten days in Honduras, I thought it wise to chronicle my week before I forget a moment.

What I did in Honduras (hotter, sweatier, dirtier, and happier than I can remember ever being) turns out to be quite a lot…

Held babies that don’t belong to me. Not only orphans, but the children of shopkeepers. Every baby and child I found, I wrapped my arms around or touched their heads, praying over them in my heart.

Organized storage rooms. Dirt-covered floors, jumping spiders, bags of donations, soccer balls, and more all needed to be put in their places. I spent several hours making sense of a space no one wants to enter due to the heat; it had become so disorganized, it was barely functional. Enter my mother’s daughter.
Before: 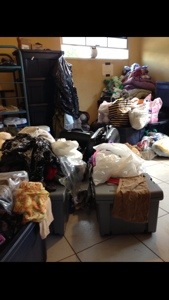 Played UNO, backgammon, frisbee, jumprope, and basketball among the heat, dirt, and bugs. For a mother of girls, hanging outside with boys aged 5-16 was a rare treat! 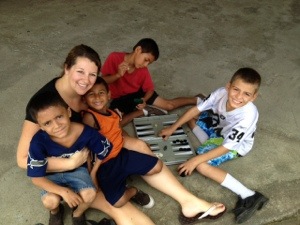 Luis, Guillermo, Ezekiel, and Frazen gave me a run for my money at backgammon

Fought off attacks by fireants and pesky no-see-ums.

Filed paperwork for a teacher so busy I don’t know how she keeps her grace. A woman who’s preference is to homeschool her own 4 children, Stephanie lives at an orphanage with 90 kids and manages a classroom of 35+ young teens.

Colored, playdoughed, and stickered with preschoolers. Just like home.

Made popcorn and poured cold Pepsi for the kids who earned movie time at school. We almost burned out the school’s one small microwave while popping dozens of bags, one at a time.

Sat through Honduran rush hour, was awakened by gun shots, and cuddled in bed with a stranger. Goodbye comfort zone!

Chopped veggies and chicken, cracked dozens of eggs, and patted cornmeal into pastalitos to feed a small army. Working alongside the tireless house mommies, I learned much about the Honduran culture.

Cried. Every time I have thought about leaving Honduras, I have been overwhelmed with sadness to say goodbye to the people, their culture, and this country, all with which I have fallen in love.

Held children whose parents have abandoned, neglected, abused, and otherwise given up. Some motivations were pure, some were purely selfish. Whatever the cause, their children are left craving love. And for a moment, I was able to give them just that. 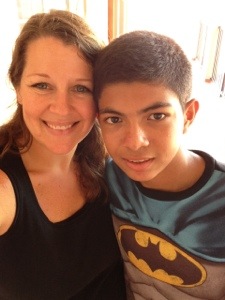 Me with the birthday boy, Carlos. 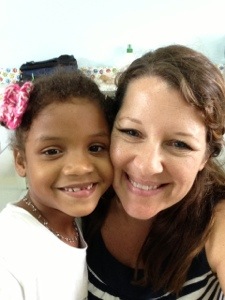 Watched a video of my daughter rock climbing in the United States. Technology is awesome!

Shopped at a tiny country grocers, a city tourist shop, and a busy mid-size grocery store. In each, the proprietors were welcoming and kind. I dread going back to my local Safeway.

Rode on a school bus with a hundred sweaty kids and smiled the whole way.

Started my days with early morning devotions and steaming mugs of Honduran coffee. Through the various perspectives of my team members, I gained a deeper understanding of God’s Word.

Helped as an assistant teacher for kindergarten through eighth grade classes. We read, sang, learned, and scored together. 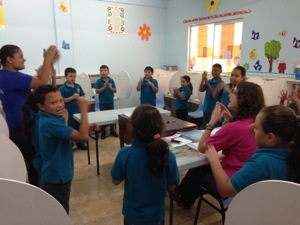 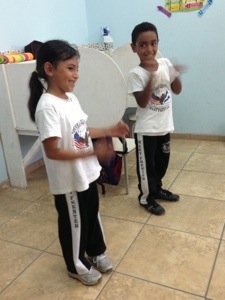 Brought sick children to a clinic.

Rocked a sleeping baby girl for three hours. With numb arms, back, and bum, I prayed God’s provision and grace for Naomi and her siblings.

Left my son. Guillermo holds a place in my heart that seems carved out for him alone. I was honored and humbled to meet him, hug him, look him in the eyes, but I could not say goodbye. I will be back for that child, in one way or another, God willing.

Indeed, this has been a 40th birthday celebration unlike any other. Thank you for your prayers of encouragement and support. It has been an honor to journey with you!

Join me as we explore all facets of this joy-filled life!

A Top 5 NSDA Program in the State of Virginia

Rooted in truth. Growing in love.

All Things Are Made New

This WordPress.com site is the bee's knees

Being Christ for the world

My current adventures in Honduras

Reflections on life, travel in big pics and few words

on earth as it is in heaven