As a child, how I hated this conversation between my parents and me. Probably as much as my daughter hates the exchange these days. I usually respond with “Life isn’t fair, but things work out in the end.”

I don’t think she believes me. Who am I to blame her? Life isn’t fair.

Our days are full of unfairness. Sometimes slight – like when a colleague takes another’s lunch from the office refrigerator. Sometimes heart wrenching – like when a leg is broken, a tumor is discovered, and a wedding is postponed.

My mom and I were at the church, meeting with the wedding coordinator one last time before the big day, when my cell phone rang. It was his best friend calling, the one who took him skiing for the weekend. The last thing I had said as they piled into the car was “Whatever you do, don’t let Frank break a leg!”

The hesitation on the line spoke before he did. “Frank broke his leg.”

In the quiet sanctuary where a bell choir was soon to perform our processional, my disbelief rang out loud and sharp. My fiancé was broken, in pain, and separated from me by 300 miles of mountain road and a winter snow storm. Life isn’t fair.

Back at home, my father put on his fighter pilot bravado and confidently announced the wedding would go on as planned. Still reeling from a death-defying fall my sister had taken on her own honeymoon three months earlier, my parents were too shaken to face another wedding tragedy. My brave dad opened the box of wedding invitations and carefully began adding the stamps. He prayed for Frank and laid his trust before God. All would work out, this we knew.

A week later, Frank and I sat in his hospital room as the orthopedic oncologist explained the details of a “giant cell tumor.” It had been sending warning signals for several weeks. In fact, Frank had planned to see a doctor after the ski trip to complain of pain in his right knee. But the fall made that appointment unnecessary. The tumor had grown outward from inside his femur, reducing the bone strength to that of an eggshell. It didn’t take much to crack, so the speed and force of his fall on the ski slope crushed that section of his leg bone. It would have to be rebuilt. And it would take months.

With the doctor’s news pounding in our heads, we talked over our options. February 28, the wedding date we had so carefully chosen, was only weeks away. Frank was still in the hospital, awaiting his first of several surgeries. To secure the leg bones from moving while the femur began to heal, an “external fixator” would be installed. You’ve seen the barbaric contraptions; sometimes called “rods and pins,” this would jut out of his leg, extend from upper thigh to lower calf, and keep his leg perfectly straight. For six weeks. Pants wouldn’t be able to cover it. Walking with crutches would prove too painful to cross the room, let alone walk down the aisle. There was no question. Our wedding would be postponed. We held hands and cried for all that was broken, all that was unfair.

On the weekend of our intended ceremony, Frank went under anesthesia again, this time to remove that wretched contraption and all traces of the tumor that caused so much damage. For twelve hours, I paced the halls, kept our families informed on the phone, and prayed for the man I had already committed to love through sickness and health.  Finally, the OR nurse said he was ready for a visitor in the recovery room. But, we weren’t yet married; I wasn’t his wife. And so his mother went to see him.

Over the next several months, Frank fought his way through more surgeries, pain killers, and physical therapy to strengthen his leg and give his knee range of motion. We rescheduled our wedding date to late summer and looked forward to celebrating under the bright August sun. One sunny summer afternoon, he asked me to join him at PT. He went about his usual exercises for a bit, then asked me to wait just across the room. Ever so carefully, he took a step, then another, and another, each with a perfect gait. Since the early spring my fiancé had kept a secret from me. His goal through all of the painful physical therapy was to walk, unassisted and without a limp, down the aisle with his bride.

Life isn’t fair, that much we know. But when you try to make the most of it, it really does work out in the end. 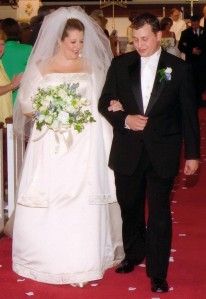 A memory that will be with me always. Frank took my hand, escorted me from the church, and exclaimed, “We did it!” August 2004

* Advertisements displayed below are chosen by the blog host, and are not endorsed by the author. *

Join me as we explore all facets of this joy-filled life!

Rooted in truth. Growing in love.

All Things Are Made New

This WordPress.com site is the bee's knees

Being Christ for the world

My current adventures in Honduras

Reflections on life, travel in big pics and few words

on earth as it is in heaven